As the FMBA approaches our AGM on November 21st, 2020 (via video conference this year), all players and stakeholders across the league are now invited to take part in our 2020 State of the League Survey! Each person can only take the survey once, so please be thoughtful in providing your answers.

This is an opportunity for everyone in the league to submit feedback and make their voices heard (anonymously if desired) leading up to the AGM so the Executive can identify issues that are important to our members, please feel free to send in your feedback to help guide the conversation on how we can improve the league moving forward! 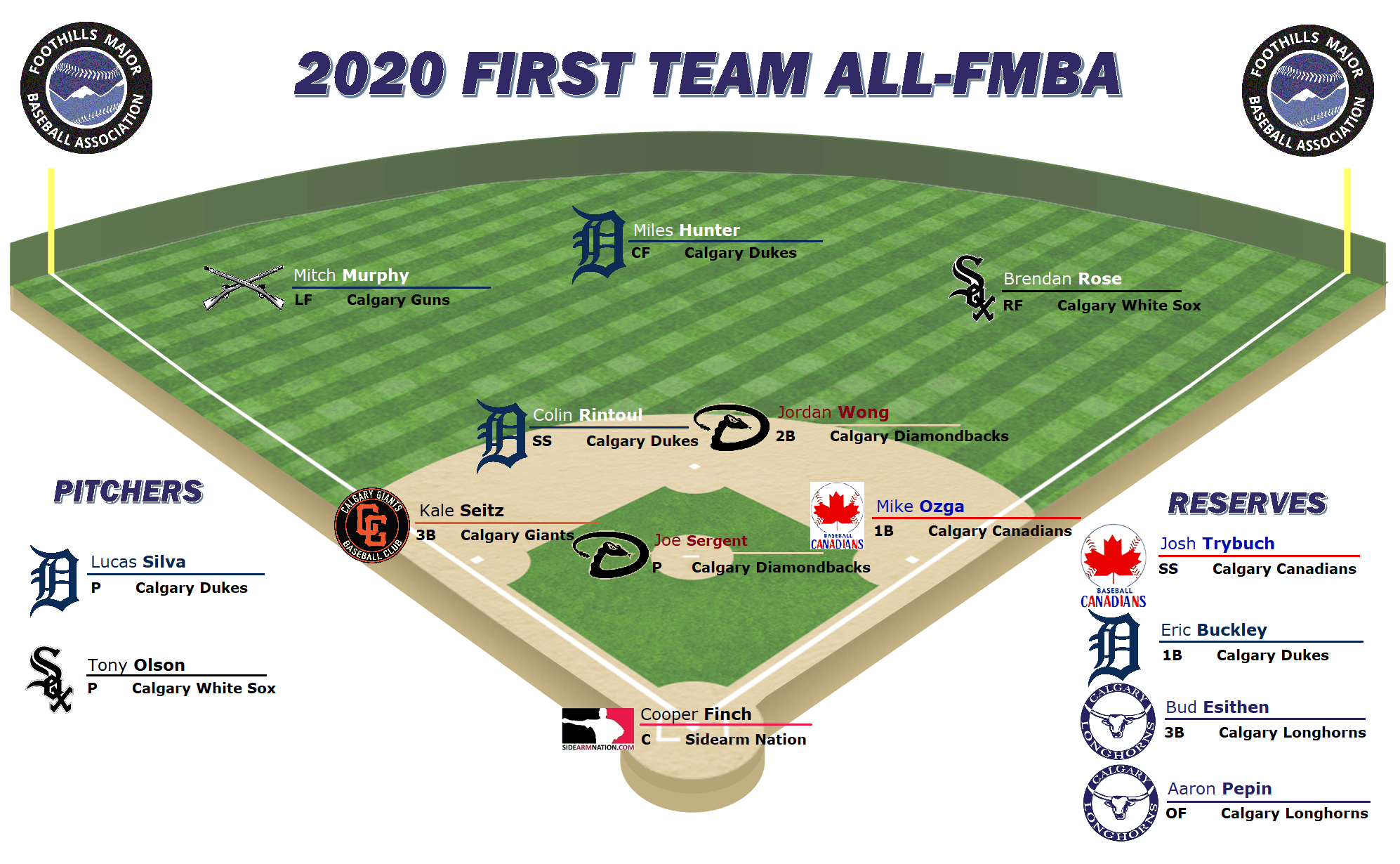 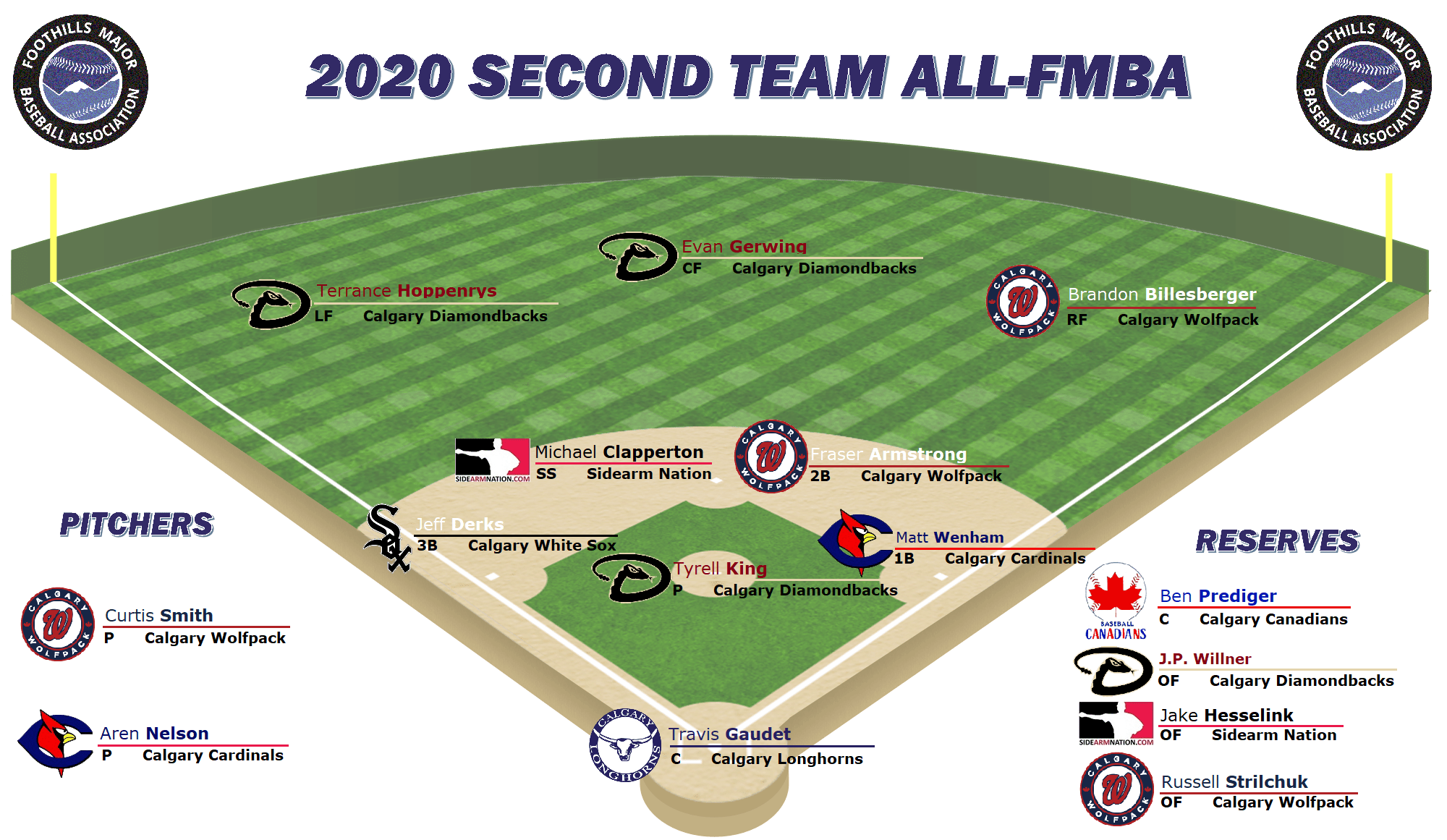 In what would end up being the only full series that was played this week, Sidearm Nation took two games and the season series from the Cardinals. Sidearm Nation received big production at the plate from Jake Hesselink and Jordan Smith this week, who tallied a combined twelve hits (four of which went for extra bases) through nineteen at-bats. They crossed the plate six times and knocked in five runs between the two of them as well. The Cardinals were able to salvage one game in the series on the back of Aren Nelson’s complete game victory on the mound in Game 2. Nelson only allowed four hits and three walks while striking out five during the gem. The Cardinals start their final series of the season on Monday when they take on the Calgary Wolfpack coming off of their bye week. Sidearm Nation has a single game with the Guns prior to the August Long weekend.

white sox olson back in the win column, sox take only completed game this week

The White Sox and Guns suffered a Game 2 rain out during this series, and Game 1 on Tuesday night was suspended due to darkness in the midst of a 4-4 tie in the twelfth inning. Game 3 was able to be played as originally scheduled, however, and the White Sox took the game by a score of 4-2 over the Guns. Sox ace Tony Olson got the start and bounced back from a loss his last time out with a strong complete game outing to give the Sox a chance to sweep a series for the first time this year. Olson struck out nine in the contest, pushing his league-leading total to thirty-two. Sox OF Brendan Rose stayed hot going 3-3 with a double, and Dan Chappel cranked his first home run of the year with a three run shot in the third inning.

The Diamondbacks and Canadians also lost a game to rain this week, but were able to play two on Sunday in which the Canadians took Game 1 with a 6-5 extra inning victory. FMBA Player of the Week Joe Sergent followed that with a complete game in a 9-1 Game 2 win, evening out the series at a game a piece. Sergent allowed no earned runs while striking out ten and only surrendering three hits and one walk. Josh Trybuch stood out offensively for the Canadians this week going 3-8 and smacking his first home run of the season, while Brendan Sutherland and JP Willner did most of the damage at the plate for the Dbacks. JP was a ridiculous 6-9 across the two games with three doubles and a triple while driving in a team leading five RBI. Sutherland chipped in with a 4-7 line and two RBI of his own.

Player of the Week

This was the closest series of the week, with both games being decided by a single run. The Longhorns took the early game behind a complete game effort on the mound Ted Eisthen. Jade Alberts was the only Horn with multiple hits in the game, one of which was a double, but the story of this game was the eyes at the plate for the Longhorns. They drew nine walks from the Guns pitching staff which helped keep the traffic heavy on the bases for the handful of base hits they did have. Game 2 was the opposite story, as the Dukes won the nightcap with a strong pitching performance from Lucas Silva, who struck out nine Longhorns in only six innings on his way to earning the victory. He only allowed two hits and didn’t allow an earned run in the start either. Star Dukes OF Miles Hunter had a monster game at the plate going 3-3 with two doubles and two RBI while scoring once himself. 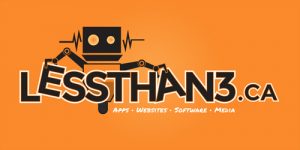